You’d have to be living under a rock for the last ten or so years not to have heard about the term live-streaming. Then again, maybe you’re just a boomer. Who knows?

Joking aside, streaming is what PC gaming is all about these days. It’s a way to mix creating and delivering content to an audience over the internet as it’s happening, in real-time. On a technical level, it’s pretty simple and doesn’t overload the viewers’ devices either. Awesome, right?

But are there any benefits of a live stream, or is it just plain fun? For starters, it doesn’t cost that much, so it’s a great investment if you’re ambitious and dream of becoming famous on YouTube or Twitch.

The content is also simple to create, and you manage your own work hours. And finally, it’s a social experience that connects you with tons of people across the globe. But let’s not get ahead of ourselves. Let’s explain everything in more detail.

How Does Live-Stream Gaming Work?

Before we get into the advantages of live streaming, we need to explain how it works. But don’t worry, we won’t go into technical details, as that’s not the purpose of this text. We’ll simplify things just enough so that everyone who has ever used a computer or smartphone can understand. So, let’s start our live broadcast, shall we?

This type of content delivery works in real-time, and it allows viewers to enjoy it through numerous platforms. The most common delivery vehicles include HLS, RTMP, and WebRTC. The latency between the creator and their audience is minimized or practically non-existent, depending on the internet connection.

People use live-streaming for numerous things, including:

It Doesn’t Cost Much

As we said, live streaming your event doesn’t cost almost any money. And in prospect, it actually reduces your bills because you can earn from it. This is why many companies who are more than concerned with the state of their books use live streaming to market their products or even train employees. They can deliver the same information to everyone at the same time, while only paying the bill for the internet they use.

In the past, if you wanted others to witness what you’re doing — be it gaming or anything else — you needed to host an actual event or sell VODs (video on demand). That, of course, costs more money since it includes travel, lodging, and even security expenses.

However, with streaming, none of that comes into the equation. Although the final event might not be as grand and fancy as you’d want it to be, it still delivers the content, which is the key part.

Since we’ve settled on video game live streaming, the pro of delivering this type of content is that it’s easy to make. Aside from requiring a gaming PC and a camera by your side, you need a live streaming platform (YouTube, Twitch, etc.) and a title to play. This can be anything popular these days, so League of Legends, Dota 2, CS:GO, and so on. But then again, you can find a niche title as well and make an underground streaming career.

If you watch a couple of streams, you’ll notice several tropes. Many of these gamers sit in front of a plain, green background that they digitally manipulate so that it shows a CGI background. They’re usually in the corner, scaled-down. Additionally, they act pretty eccentrically, talking BS constantly and having random moments when they scream. It all sounds like too much for some people, but it gets the job done.

You Earn Big Amounts From It

On average, Twitch or YouTube gaming can earn you between $3,000 and $5,000. Not bad for playing games you love, eh? Of course, you can up your earnings to six figures even, as that’s the range where popular, successful live-streamers stand nowadays. But that’s not all. The best of the lot are basically the upper echelon now. Some of them make almost $800,000! That’s unrealistic for most, but it’s okay to dream.

Yet, how does money-making actually work when streaming video games? Well, there are a couple of ways. Firstly, there are donations from fans. You set up a donation account, and your viewers give you money if they enjoy your content. Sure enough, it might sound like begging, but it’s what the best do. So, don’t be shy. On the other hand, there are subscriptions, and they follow rules set by the platform on which you’re active.

Other ways to earn money while streaming video games include advertisement, sponsorships, affiliate marketing, merchandise, and coaching. Advertisement is somewhat controversial since not all streaming apps offer ads, but it’s worth a shot. Sponsorships require you to become a bit more famous, and affiliate marketing includes striking a deal with the game creators. And lastly, merchandise and coaching are well-known tactics. 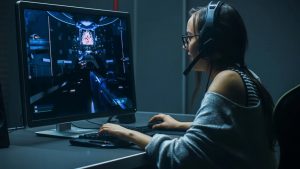 Time Is Always Yours

What’s the worst part of being an employed adult? Confusing tasks, bosses, or annoying coworkers? None of those. It’s that you have to work even when you don’t feel like it. However, if you start a career as a video game streamer, you’ll handle your own work hours. This means that you can stream one day and then be quiet for a week, doing other things that occupy your attention more. But that’s not all.

Controlling when and how much you’ll stream can positively affect the quality of your content. The more time you take off streaming, the more you’ll have to prepare for your next outing in the online community. You can up your playing skills, find out new modes and playing styles, and research topics that you’ll be covering. Either way, streaming content allows you to grow both as a player and as a brand simultaneously.

The last thing we want to mention as a major pro of streaming video games is building connections. This line of work, if we can even call it that, is all about social interactions with others — your audience. Aside from making the whole deal fun, interaction with viewers shouldn’t just end there. It’s not just about jokes and miswritten comments in the chat that make you say silly things — you can view it as a lucrative opportunity too.

You never know who is watching your videos. Everyone is under a nickname, just like you. Still, you can bet that among bored teens and college students, there are folks who can offer a job opportunity. From people who work for video game publishing companies to YouTube and Twitch employees, they all watch streamers and offer deals. Therefore, you should focus on every stream as if it were a job interview for the highest-paying position.

Nevertheless, don’t let that take away from the fun of playing video games. After all, they exist to cheer us up and broaden our views. Long gone are the days when the mainstream media would sell the idea of how they influence bad manners, violence, and laziness in young people. Those are just empty words that have no meaning anymore. Video games are one of the biggest mediums nowadays, so why not make a buck or two from them yourself?